We loved the review of our Summer Concert in the Henley Standard by composer Pamela Chilvers. Here it is in full.

‘Plenty of musical variety and colour from grown-ups and youngsters’ 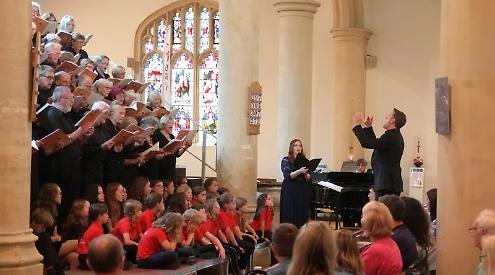 ‘THE atmosphere was buzzing for the Spirit of Summer concert at St Mary’s Church, which was packed with an audience eagerly awaiting what was to be a varied and uplifting programme.

The combined Henley Choral Society and Henley Youth Choirs gave committed performances beginning with A Fancy of Folksongs by Cecilia McDowall, descriptive songs of the perils and joys of love.

The senior choir sang from memory (how good children are at this; we tend to find it harder the older we get).

Warm Summer Sun by a relatively new composer, Nico Muhly, certainly gave us a feeling of lazy summer days perhaps on the river at
Henley.

This was contrasted with Under The Sea in which the children executed the syncopated rhythms with panache under the enthusiastic direction of Alex Haigh. The applause was electric; lovely encouragement for the children, who beamed.

I’m sure it’s not true of Henley primary schools, but there is so little singing in school these days that pitch is dropping as many children are unable to reach higher notes.

Nurturing singing at an early age is vital to wellbeing as well as achievement, so congratulations to Alex for inspiring these wonderful young people.

The audience were encouraged to get involved with the Beatles’ Octopus’s Garden and The Spiritual Medley, which was great fun for all.

The second half was taken up with John Rutter’s Feel the Spirit. I had the privilege of meeting the great but humble man in Cambridge a few years ago and found he had great depth and spirituality, which is apparent in his compositions.

Richard Harker, the new conductor of Henley Choral Society, showed a first-rate ability to bring out not only the meaning of each movement but also the directing of the tonal control, making sure the “piano” sound was just that.

So many choirs can sing “mf” very well but those who can sing “p” and maintain the tone are rare. I was moved particularly by Sometimes I Feel Like a Motherless Child and the mezzo-soprano Caroline Carragher gave an ethereal and out-of-body performance, genuine and inspirational. Harker got the audience involved in When the Saints Go Marching In and suggested that there were many in the audience quite capable of joining the choir.

Come on you tenors, where are you? Choirs are having to use altos to sing tenor parts. You are rare — embrace that and join up as you are needed.

A special mention has to be given to David Smith, a brilliant musician and accompanist who played with authority and musical excellence — bravo.

This was a thoroughly enjoyable concert with plenty of variety and musical colour. Both Henley Choral Society and Henley Youth Choir are going from strength to strength.’