Glorious late summer weather, a wonderful orchestra, thrilling programme and an incredibly enthusiastic and appreciative audience made the Orpheus Sinfonia concert presented by Henley Choral Society on Saturday 19th September a great success. Conductor Thomas Carroll introduced each piece with a witty anecdote or observation, violinist Anna Roder shone in her rendition and direction of ‘Summer’ from Vivaldi the Four Seasons. Further treats followed including Brahms Hungarian Dance No. 5, Strauss Radetzky March and Frulinghsstimmen Waltz, an incredibly moving rendition of Elgar Salut D’Amour as well as the rousing Carmen Suite by Bizet and a unique arrangement of Gershwin I Got Rhythm.

On twitter Orpheus Sinfonia commented: ‘Wow! That’s that feeling we’ve not had in six months – playing live, together, to an amazingly appreciative and fabulous audience – what an atmosphere! Thank you so much Henley Choral Society for making it possible and bringing music to life on the bandstand in Henley once more.’

The concert was variously described by members of the audience as: ‘a golden afternoon,’ ‘an experience to cheer us through the months to come’ and ‘an event to rival the Henley Festival.’

Henley Choral Society chair Susan Edwards explains: ‘We had booked the Orpheus Sinfonia to play at our Spring Concert in March. When the concert had to be cancelled due to the lockdown, we honoured our financial commitment to the orchestra. We are delighted that Thomas Carroll and the Orpheus Sinfonia repayed that commitment with such a wonderful concert for our whole community.’ 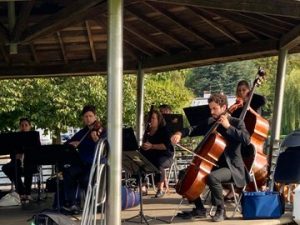 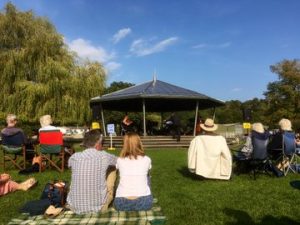 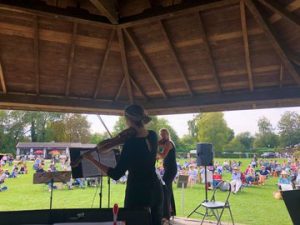